Bitcoin Price Analysis : Keep Holding or Buy in the Dip?

"BTFD" is an acronym for "buy the fucking dip" — is the sentiment pervasive amongst veteran and institutional investors saying that traders should accumulate more assets as their prices go down.

As new entrants to Bitcoin markets have been panic selling at a loss, the recent market slide has not vexed the old hands. The crash predominantly saw newer traders exiting from their positions at a loss while long-term hodlers stood their ground. 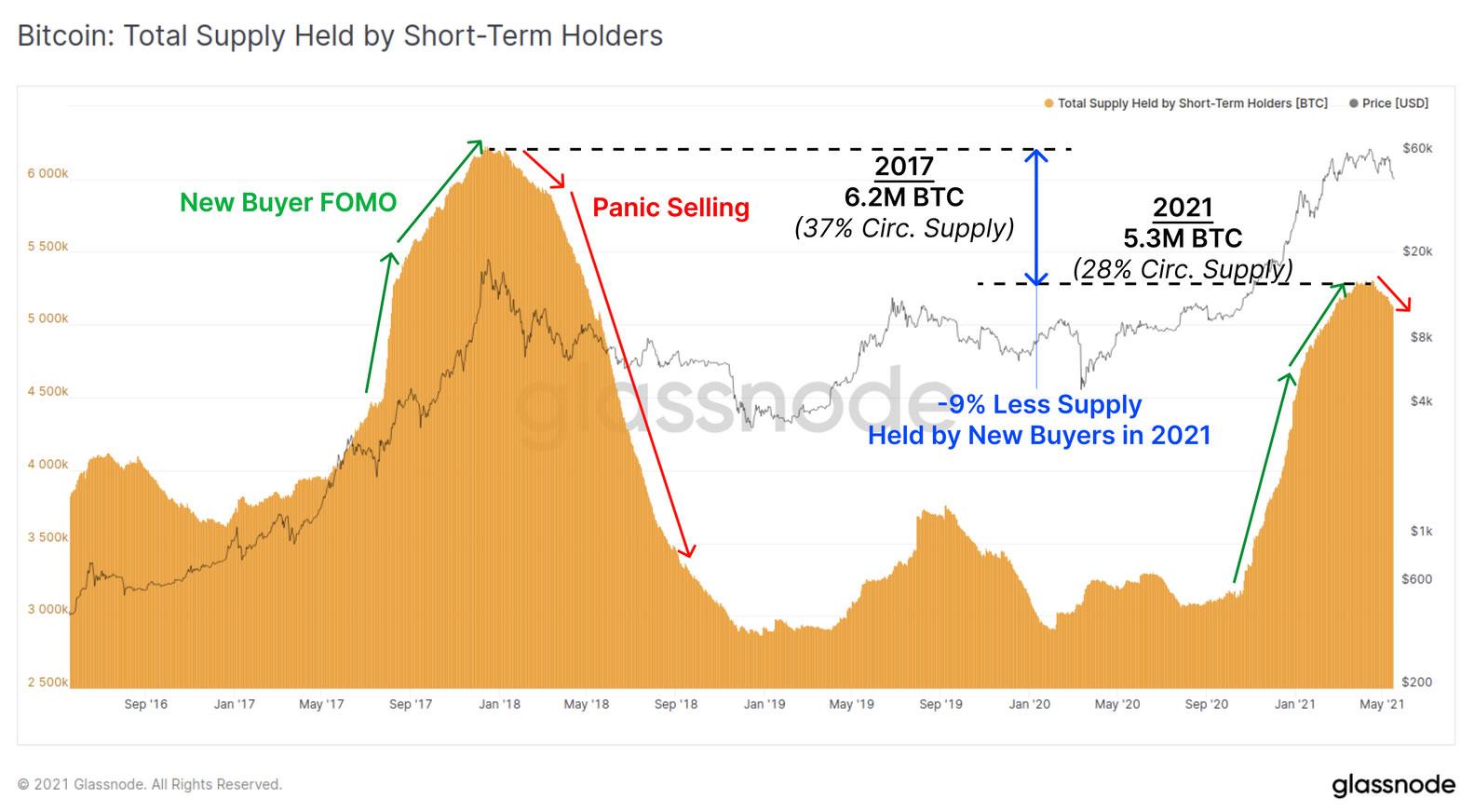 What came before the Dip?

On May 12, the billionaire entrepreneur Elon Musk reversed his company Tesla's decision to accept Bitcoin payments for its electric vehicles, citing environmental issues related to the Bitcoin mining industry.

Nevertheless, he noted that Tesla would keep holding more than a billion dollars' worth of Bitcoin on its balance sheet. But over the weekend, Musk engaged with an alleged cryptocurrency scammer on Twitter when the latter discussed the prospect of Tesla dumping its entire $1.5 billion Bitcoin stash on the market. Musk responded with an "indeed," prompting traders to believe that he would indeed sell all of Tesla's Bitcoin holdings. Musk later clarified that Tesla has not sold its Bitcoin.

But the damage was done. As Bitcoin's price fell, Musk's comments lead to an out-and-out Twitter spat with the Bitcoin community.

Analysis of the Dip

Falling wedges are bullish reversal patterns. They appear when price trends lower inside a range defined by two downward sloping trend lines — as the reaction highs and reaction lows forming on them converge.

It typically leads to the price breaking above the upper trendline by the maximum wedge length. The technical theory serves as the basis of bullish bias on Bitcoin. 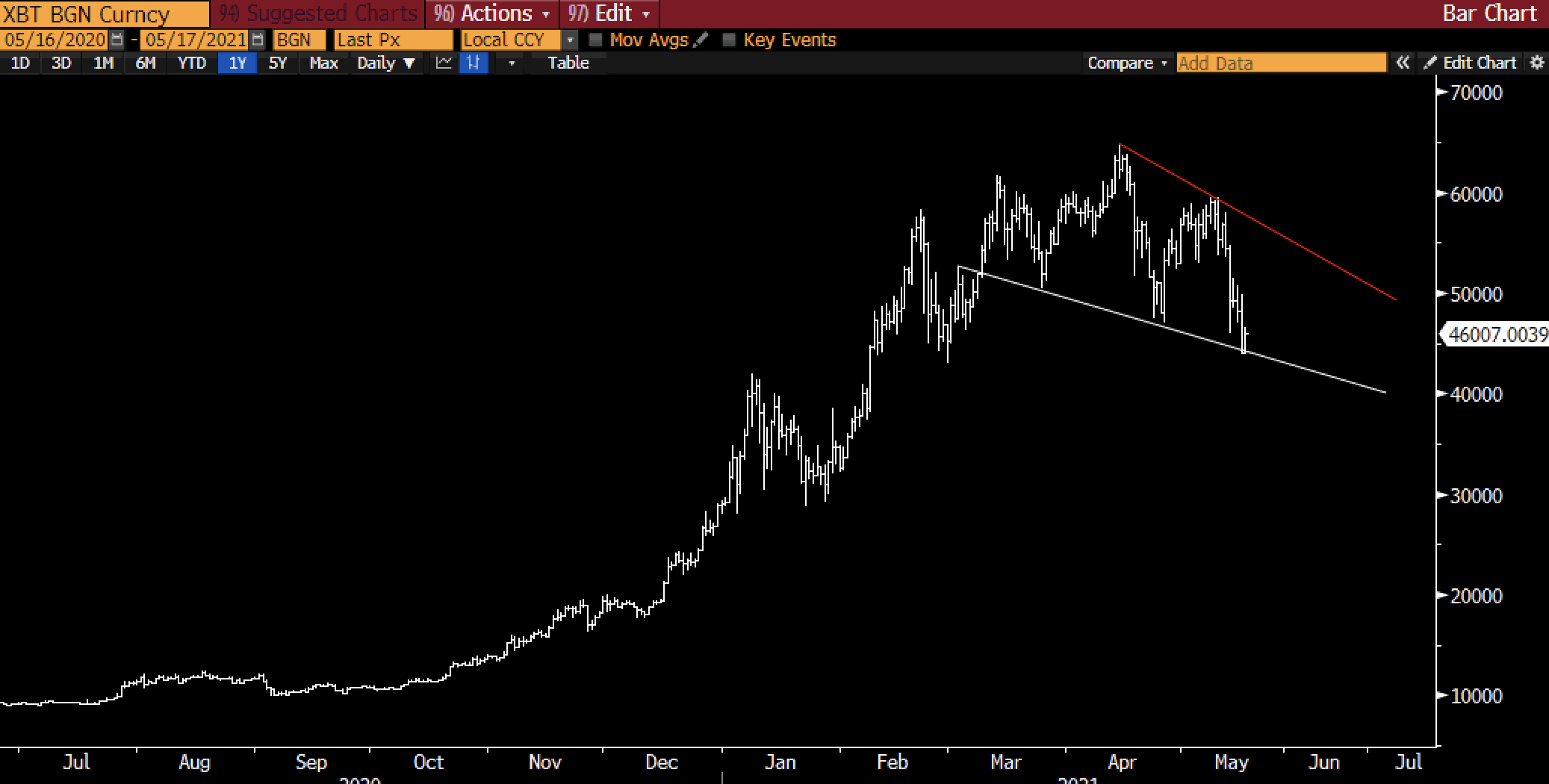 A mirrored image of a BTC trade setup shows that the BTC/USD exchange rate could rise by almost $14,000 on the next upside breakout move.

Even after its $42,000 dip, Bitcoin is more attractive than ever for miners, and its network security is therefore also more solid than ever before.

Both hash rate and difficulty have staged a miraculous recovery in recent weeks, reclaiming all-time highs after a miner washout caused its own brief price crash.

The weekend proved to be no different, with weekly average hash rate topping 180 exahashes per second (EH/s) for the first time.

Difficulty is still on track to increase by over 10% at the next automated readjustment in 11 days’ time. The previous readjustment on May 14, at 21.5%, was the largest positive shift since June 2014.

Additionally, some macroeconomic factors may also provide a boost for Bitcoin, particularly as the dollar slumps.

Additionally, the U.S. Federal Reserve will release the minutes of its April meeting on May 19, which are expected to say that the central bank will keep interest rates near zero, purchasing government bonds and mortgage-backed securities at the pace of $120 billion per month — at least until 2023.