As a characteristic decentralization feature every ADA token holder gets a stake in the Cardano blockchain network. They may opt to delegate ADA stored in wallets to the Cardano stake pool and earn rewards for their participation in helping to run the network successfully.

ADA supports a variety of applications and services on the Cardano platform, including Daedalus full-node desktop wallet. Developers can also utilize the Cardano blockchain for building smart contract programs.

The future roadmap of Cardano will focus on building a decentralized stake pool operator (SPO) ecosystem, giving the power to validate blocks and transactions to stake pool operators while enhancing the flow of information between nodes and managing connections using Peer-to-Peer (P2P) governor integration.

Cardano offers crypto currency optimizations, such as secure smart contract with negligible transaction fees. based on scientific research and formal verification, a process by which its code is verified mathematically. IOHK, the company that has developed Cardano, has published more than 90 academic papers outlining its technology. The Cardano team also publishes this research through its official website .

How does ADA (Cardano) work?

The much-advertised primary use case of Cardano is to facilitate transactions in its native cryptocurrency token, ADA, and to provide a blockchain platform to develop and host decentralized, smart contract based, secure and scalable applications.

Furthermore, machines participating in the Cardano platform can join as one of three nodes.

Ouroboros is the signature proof-of-stake (PoS) consensus algorithm used by machines participating on the Cardano platform to secure the network, validate transactions and earn newly minted ADA. Ouroboros divides time into epochs and slots, where epochs are the overarching time frames, and slots are 20-second increments within epochs. Within each slot, a slot leader is randomly chosen and is responsible for choosing the blocks that get added to the blockchain. Only mCore nodes can be elected to become slot leaders.

Ouroboros defines two types of blocks that get added to the blockchain:

Once the epoch has ended, the previous slot leaders elect the slot leaders of the next epoch. The votes happen via a mechanism where each slot leader performs a “coin tossing act,” which the Cardano team says increases the randomness by which new slot leaders are picked.

Why use ADA (Cardano)?

These features made it the blockchain of choice by the Ethiopian government, covering its entire education system. This is on top of previous commercial contracts with food and footwear manufacturers related to logistics monitoring and product tracking. Furthermore, top crypto currency investors are actively seeking to add ADA to their portfolio considering the market interest in staking protocols and blockchain built to enable decentralized applications.

What Is ADA Current Price Position?

By June 1st, its trading volume had increased by almost 13%. More importantly, in anticipation of smart contract integration via Alonzo upgrade, ADA prices jumped dramatically. From January 2021 to June 2021, ADA crypto coins surged by 886%, from $0.1753 to $1.73. It currently trades at $2.06. 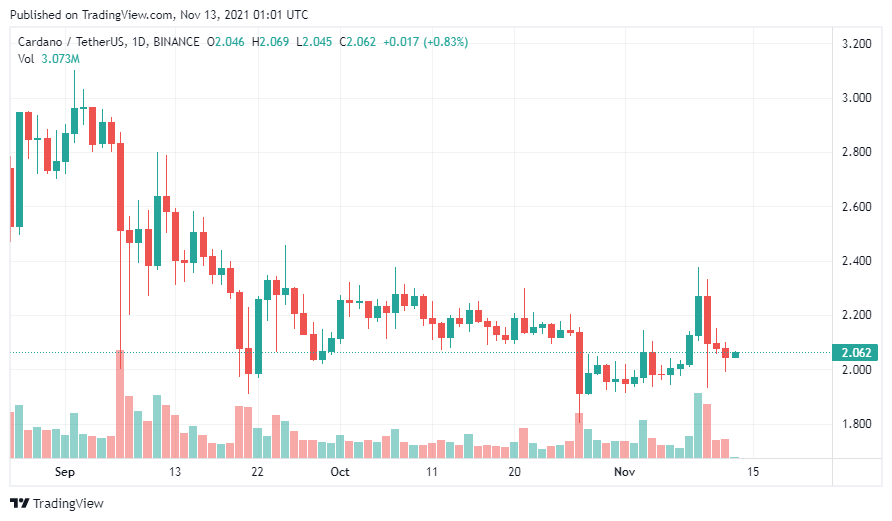 The ADA (Cardano) price currently is $2.07 USD with a 24-hour trading volume of $2,793,636,146 USD. There are already one million ADA wallets. Out of those wallets, 70% of ADA crypto coins are staked among 2,500 active pools, making it a highly decentralized network. ADA price is already ready to move even higher with exciting upcoming development and dApps, which will all have negligible transaction fees.