Experts have long argued on the relation between the price of Bitcoin and the Bitcoin network’s hash rate. Now, if the price follows the hash rate, this could prove to be another indicator for predicting bitcoin (BTC) price trends. According to data from blockchain.com, the Bitcoin network hash rate hit a new all-time high of 165. Million TH/s on Feb 9th.

A cryptocurrency network’s hash rate is the speed at which miners are able to perform proof-of-work (POW) calculations per second. The higher the hash rate, the more blocks are being mined which increases the chance an individual miner has to solve the block reward puzzle and receive newly mined bitcoin. 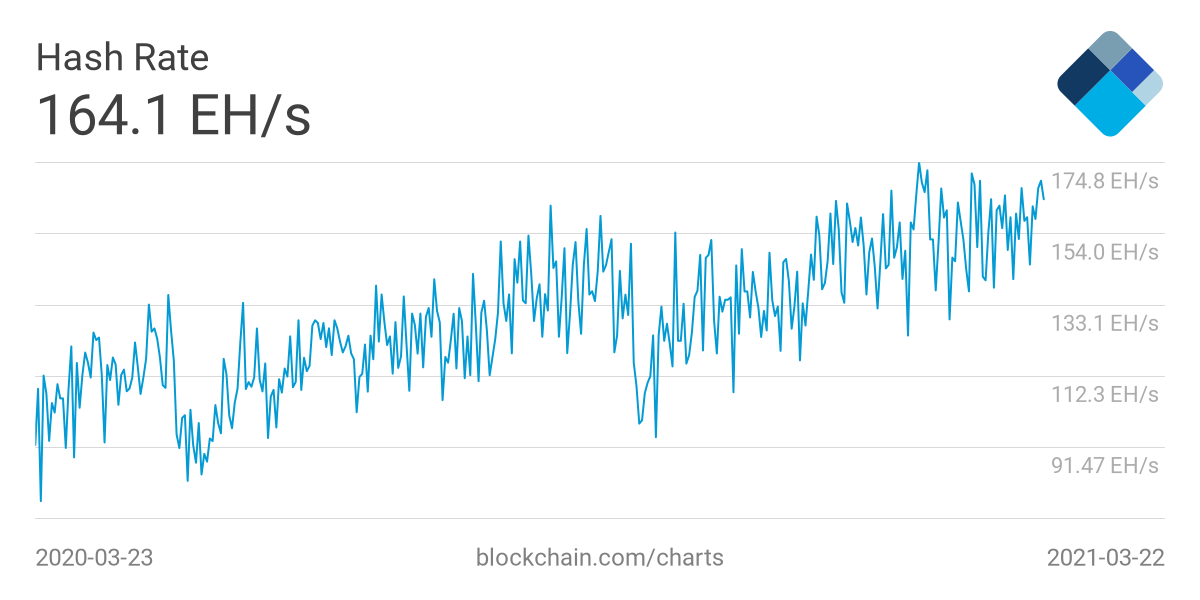 A high hash rate is a general indication of a healthy bitcoin mining environment.

It means a growing number of miners are using the most efficient mining hardware they can afford and competing with each other to process transactions and solve the block reward puzzles. This proof-of-work makes the Bitcoin blockchain secure and immutable.

Advocates of the ‘price follows hash’ theory believe hash rate isn’t just a health metric of the network; it offers a wider insight and is a measure of adoption and increasing disillusion with the financial system. If this is right and the Bitcoin hash rate continues to hit new highs in the coming weeks and months, then we may be seeing a new all-time high in the price of Bitcoin soon.

The halving is a programmed monetary event that occurs on the Bitcoin blockchain every four years where the number of new bitcoins that are created via the block reward is reduced by half. This reduction in Bitcoin rewards forces many miners to drop off or cease as their profit margins drastically reduced owing to the reduced block rewards.

Since May 2020, however, the hash rate has flooded back to the network and has been trending upwards for almost an Year. This suggests that miners retain long-term faith in the investment opportunity offered by the network and are still willing to participate in the Bitcoin gold rush. The price of BTC has risen from trading at USD 9k+ at halving to trading at over USD 60k+ a nearly 600% rise.

Bitcoin mining is a war of attrition for resources. As hashrate rises, there is more competition on the network, it becomes expensive to mine, and revenue margins are eaten away at. Surprisingly, the upward hash rate trend has continued to rise, despite mining profitability recently touching lows.

Hash rate has been able to grow this year thanks in part to cheaper mining equipment. This has allowed larger mining operations to bulk order newer generation mining hardware. Large miners appear willing to make big bets despite narrowing profit margins. Smaller miners have been priced out of the mining market and have been unable to keep up with the larger players with financial cushions. There are long term concerns that these large mining companies are playing a dangerous game taking on huge operations and high overheads in the face of increasingly tight margins. The collapse of a mining company could be disastrous for the Bitcoin hash rate and leak back into the price of BTC. In the near term, however, the ongoing uptrend in hash rate is likely a bullish sign that indicates present fundamental strength and faith from the Bitcoin mining community that they will see a return on their ambitious investments in 2020.

Crypto enthusiasts believes that the Bitcoin economy is designed in a way that the hash rate follows the price.

Additionally, the hash rate follows the price because miners are paid in bitcoin while incurring local currency costs. This means that increasing the hash rate during a non-profitable mining environment would not make economic sense for a miner. Accordingly, Miners expand their operations in order to make the most of the ongoing higher prices. As long as the price maintains momentum, the hash rate will likely stay high.

With similar logic, it is important to understand that there is also negative price pressure being created as part of this feedback loop. Miners operate marginal businesses, they have to sell a significant portion of their mined bitcoins to pay for expenses. Miners are therefore creating constant downward pressure on price. If there weren’t new investors entering the market the price of BTC would decline. During periods of market bullishness, demand to buy bitcoin driven by hype exceeds this miner sell pressure and the price rises, when this cycle ends and markets enter a period of bearishness, miner selling amplifies investor selling.

The higher hash rate may indicate more miners looking to sell BTC, because their operations are more expensive. For a given level of demand if the rate of supply of Bitcoins has reduced, then the price of the asset should rise naturally.

With fewer Bitcoins being created daily, a Bitcoin supply shortage has been accumulating in markets. Participants have been bidding for a significantly reduced supply available on exchanges. Factors like recent cryptocurrency acceptance by corporate giants such as Visa and JP Morgan and a weak US dollar have increased demand to buy bitcoin in recent months and with miners selling less Bitcoin during this cycle, price growth has been accelerated.

A Final Word of Caution

For a definitive answer on whether the hash rate follows the price or vice-versa, we will likely need to wait another ten years to have a large enough data set to accurately analyze the correlation.

What is clear, however, is that there is a relationship between these two metrics that investors need to be aware of and should keep an eye on. For example, if the hash rate is on the rise and the price of bitcoin is rising alongside it this could mean that miners are anticipating the rally to continue and are mining coins to take advantage of the higher prices.