Canadian-based Geometric Energy Corporation (GEC) announced that it has paid SpaceX in dogecoin to carry a 40 kilogram cubesat – a miniature satellite – as a rideshare on SpaceX’s Falcon 9 rocket. While the exact value of DOGE paid was not revealed, GEC called the mission “the first-ever commercial lunar payload in history paid entirely with DOGE” 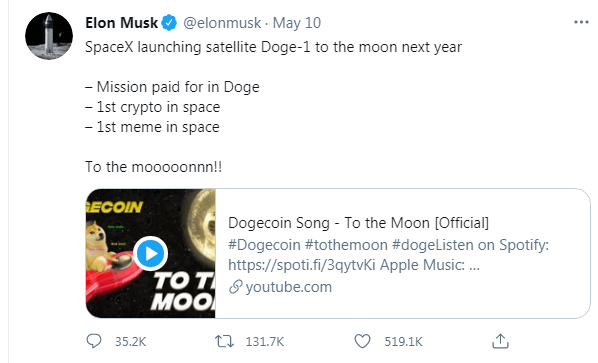 Additionally, SpaceX Vice President of Commercial Sales Tom Ochinero said that this mission would demonstrate the application of cryptocurrency beyond Earth orbit and set the foundation for interplanetary commerce.

This transaction was obviously a publicity stunt of some sort and doesn’t really add much utility to DOGE for the average person.

However, it has undeniably cemented Dogecoin’s legacy in the space world and has certainly added a little bit to its overall credibility as a currency.

A crash in retrospective

Dogecoin lost more than a third of its price over the weekend after Elon Musk called it a “hustle” during his guest-host spot on the US Saturday Night Live (SNL) comedy sketch TV show. Dogecoin is trading at $0.54, a fall of more than 16% in the previous 24 hours. Several from the crypto community were expecting that Elon would mention Dogecoin on the famous sketch TV show, which would send the cryptocurrency into a frenzy. Elon Musk did mention Dogecoin on the TV show, but it only affected the price negatively.

Although dogecoin started out as a joke cryptocurrency, the token has grown in value and seen increased adoption. Earlier in May, Oakland Athletics, an American professional baseball team, announced that fans could purchase tickets with DOGE.

Also, major wine seller Acker, said that it was accepting bitcoin, dogecoin, and other crypto assets as payment. Furthermore, Newegg, a U.S. based online retailer, enabled support for DOGE on its platform, to celebrate #DogeDay.