Bitcoin Double-Spending, Did it really happen?

From the past few hours Interest in Bitcoin “double-spending' grew up like a wildfire which is worrying traders from all over the world, after recent news that the Bitcoin network processed the same bitcoin (BTC) in two transactions – the very “double-spending' scenario Bitcoin was specifically designed to prevent. Nevertheless, its plunge prompted rich traders and institutions to purchase it at cheaper rates, leading to further liquidity crunch against its limited supply cap of 21 million tokens.

A double-spend would effectively mean the blockchain had been manipulated but it never happened.Blockchain is immutable, helping to prevent fraud and making transactions irreversible. Merchants often wait for a payment to be verified as many as six times. In the case of the reported double-spend, the transfer was apparently verified only once, entered on

“Bitcoin 'double-spend’ which media headlines are making it see as a big news is nothing but a misunderstanding of Bitcoin and how the Bitcoin network operates. 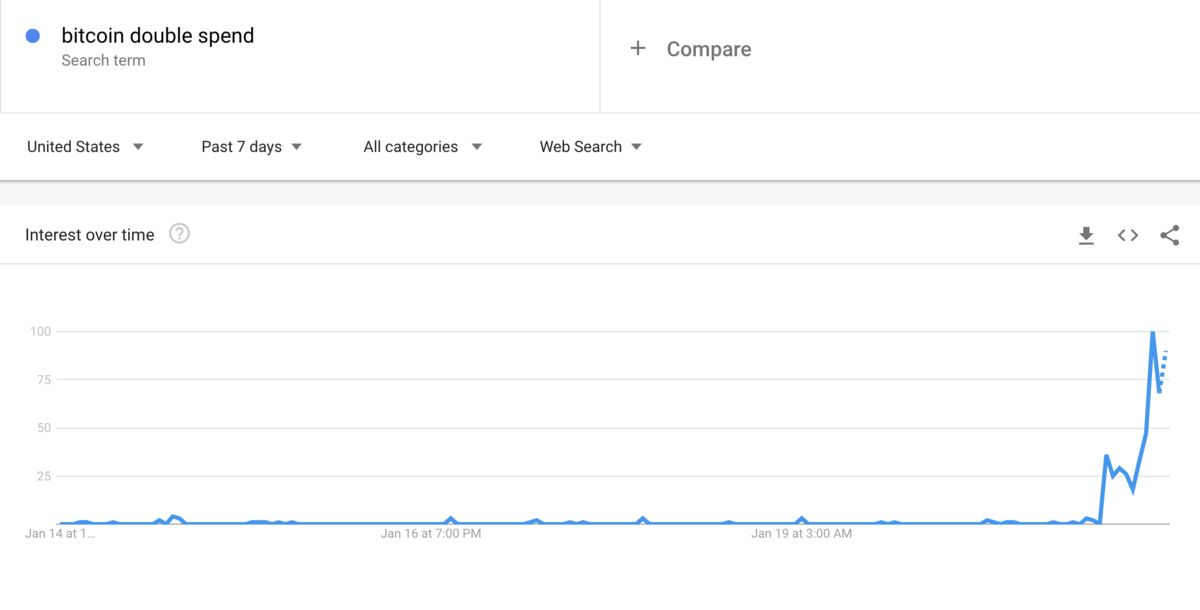 What we saw today was a one block reorganization. These occur on average every two weeks, and are a normal part of the consensus algorithm. In this very particular case, a chain re-organization of one block occurred, which is a fairly common occurrence,' Jason Lau, COO of OKCoin exchange, told CoinDesk.

Put it in another way, no bitcoin was “double-spent' because no new coins were added to Bitcoin’s supply. Instead, the same coins from the same wallet were registered in two different blocks during a typical split in Bitcoin’s blockchain.

What is a Bitcoin block reorganization?

In Bitcoin mining, mining pools from time to time to mine the same block simultaneously and thus cause a split in the blockchain’s history. When this happens, both blocks will have miners add on to them until one history wins out over the other.

For instance, mining pool A and mining pool B mine a block at the same time, resulting in two different blockchain histories (versions A and B). The miner who finds the next block in the sequence chooses to build on version A, but then afterwards the next two or three or more miners decide to build on version B. Version B ultimately wins out as more miners choose to mine that transaction history.

The other history is excised from the network and considered irrelevant and any blocks mined on it become stale blocks.

Bitmex research has changed their statement after further discovery

What BitMEX research called at first a “double-spend-like scenario' now looks like a perfect storm caused by the one block reorganization and a replace-by-fee transaction (RBF). A RBF transaction occurs when you tell your wallet to send the same bitcoin again but with a higher fee, with the hopes that it will be confirmed before the lower fee transaction.

BitMEX later reported that the appeared double spend was actually an RBF transaction, which is when an unconfirmed bitcoin transaction is replaced with a new transfer paying a higher fee. But BitMEX's Fork Monitor said that "no (RBF) fee bumps have been detected." BitMEX said in another tweet : "A transaction in the losing chain sent 0.00062063 BTC to the address 1D6aebVY5DbS1v7rNTnX2xeYcfWM3os1va, and a transaction in the winning chain which spent the same inputs only sent 0.00014499 BTC to this address." 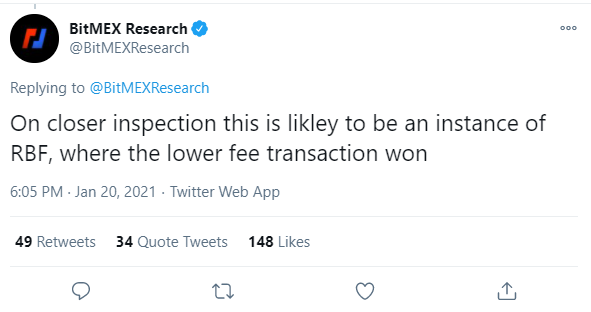