An unknown person(s) recently projected “Bitcoin fixes this” and other messages on the exterior walls of both the Bank of England and the Parliament of the United Kingdom. The message appeared underneath Big Ben as well as the front of the central bank surrounded by a red box with the artist’s hallmark, and the photo has already been turned into a nonfungible token. 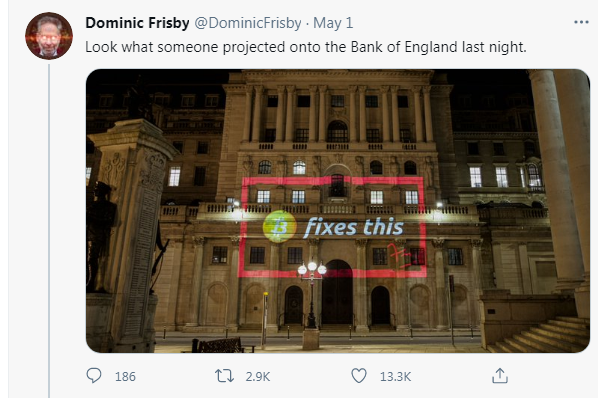 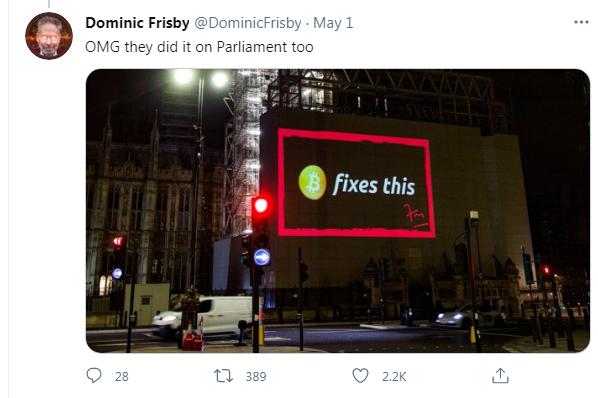 The BoE recently listed seven job postings related to a central bank digital currency and will be establishing a task force to study its rollout in the U.K. market in collaboration with parliament. However, it seems that at least one person is dissatisfied with the direction of monetary policy in the United Kingdom.

The Bank of England itself is quite skeptical towards Bitcoin, judging by its previous statements. The bank’s governor Andrew Bailey stated that cryptocurrencies in their current form won’t last for long, speaking at the “Davos Agenda” forum in late January.

“Are cryptocurrencies here to stay? Digital innovation in payments, yes,” Bailey said, adding, “Have we landed on what I would call the design, governance, and arrangements for a lasting digital currency? No, I don’t think we’re there yet.”

In another instance, Bailey said he’s “very nervous” about Bitcoin last October, specifically about individuals trying to transact in the crypto. “I have to be honest, it is hard to see that Bitcoin has what we tend to call intrinsic value,” he argued last October.

The Meme is new NFT

While it is currently unknown who is behind this, however a user nicknamed “Fraz” launched a 24-hour auction for a non-fungible token (NFT) that represents a photograph of the projection. The token is being sold on digital marketplace Rarible with a minimum bid of 0.1 Ethereum (roughly $295 at today’s prices), although no bids have been placed.

“The original and only photo (3MB), with the Artist’s hidden hallmark, from April 30, 2021, of the epic projection onto the Bank of England,” Fraz claimed.

It is unclear whether Fraz is the actual author of the message. However, the user’s avatar closely resembles the signature on the projected image—and both of them appear to be starting with “F” and consist of around four letters. So far, this is the first and only NFT minted on Fraz’s account.