Electric Cars are Green, But Digital Crypto Currency is Not,Asks Why? - Binance CEO

Changpeng Zhao’s tweet seems to be in direct response to Elon Musk’s Bitcoin comments earlier this month. Prior to this, Musk revealed that his electric-powered car company, Tesla, would no longer be accepting Bitcoin payments. In addition, Musk cited Bitcoin’s crypto’s excessive energy consumption as the reason behind the decision.

Even, NGO Greenpeace decided to stop accepting Bitcoin donations. While China renewed its battle against Bitcoin miners, for the same reason.

Read our blog on Cryptocurrency Documentaries

However, Changpeng Zhao’s response seems to point out the hypocrisy shown by both Musk and Tesla. At the time of writing, almost 40k Twitter users agreed with Changpeng Zhao’s.

Another user @JeffKirdeikis also responded to Changpeng Zhao’s pointing out that Bitcoin is more energy efficient compared to traditional finance. 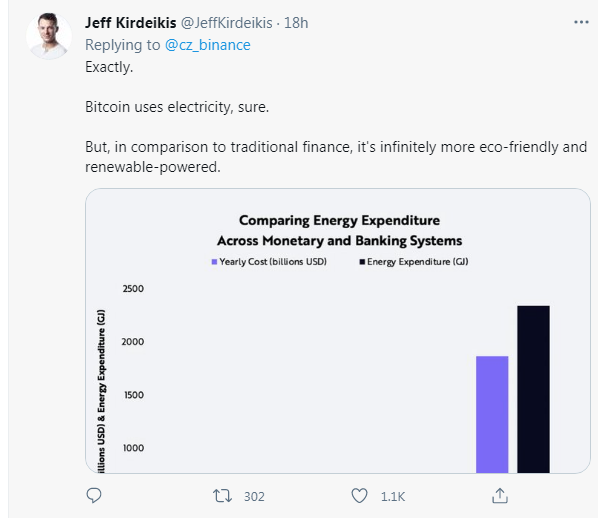 In fact, a separate study by Greenpeace and WWF showed that banks cause more pollution than Bitcoin.

Meanwhile, Musk partnered with MicroStrategy CEO Michael Saylor, and some North American Bitcoin miners to form the Bitcoin Mining Council. It is speculated that perhaps in an act of damage control, Musk aims to improve reporting Bitcoin energy consumption.