Musician gets funded $200K in ETH Token during Livestream

Mela Bee received digital coins worth $200,000 after a group of crypto followers raided her Twitch stream last night. The donating action was led by Jordan Fish, who’s more popularly known in the crypto community as Cobie. Fish runs the crypto-focused podcast UpOnlyTV and has recently engaged in several so-called “Twitch raids” alongside his co-host, Ledger.

How it all happened?

The Twitch raids follow a simple format. Fish browses the live streaming site to find a musician playing to a small audience, then takes over hosting duties. He then calls on his 313,000 twitter followers to join his channel and encourages the musician to download their own MetaMask wallet. Once they share the address, those watching the stream subscribe to the musician’s social channels and send ETH and other tokens as they perform songs live.

The recipient was a 24-year-old Canadian artist called Mela Bee. She performed songs on guitar throughout the night alongside her boyfriend, who plays under the alias DumbBuck. Playing for more than seven hours, the pair reeled through a string of classic hits including Radiohead’s “Creep” and Blink-182’s “All The Small Things.” 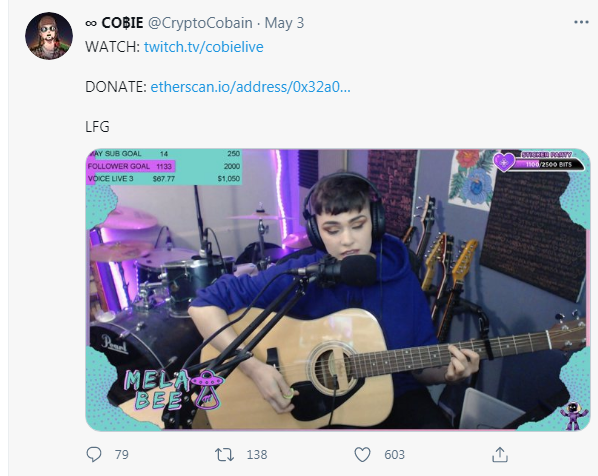 Of all the Twitch raids that Fish has organized, this one saw the biggest sum raised so far. Mela Bee was reduced to tears after watching her follower count shoot up. Later, she realized that some of those watching had sent digital money to her MetaMask wallet.

“I honestly didn’t believe it at first. I didn’t think it was real. I thought somehow I was going to be scammed, but when I realized this was legit I had to hold back tears. When I stepped away for 10 minutes it hit me and I started balling.”